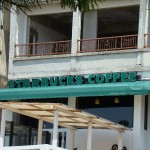 The first thing I noticed as I entered Bangkok from the airport wasn’t a temple, or a monk, or even a prostitute….it was Starbucks! Later that evening wandering around Bangkok more and more of the place I was trying to get away from was taunting me from just about every corner. Sure, I saw temples, and monks, and a lot of prostitutes but everywhere I looked I also saw 7/11, McDonald’s, Burger King, and KFC’s.

It’s bad enough that Americans have traded in their lives for the convenience of fast food but why is it necessary for these companies to invade every corner of the earth with their preservative laden junk.

Thai food is some of the best food in the world and it’s cooked with the freshest ingredients. Whether you’re dining at at fine Thai restaurant or at the corner food cart you can bet there aren’t any chemicals mixed in to give the food color or preserve it. Best of all it’s healthy.

You’d figure all these fast food joints have sprung up for the tourist population visiting Thailand that grows even more every year and for the most part I’d say you’re right but there were just as many Thais eating in these places as tourists. I saw a lot of younger Thais in these places and the thought crossed my mind that these were the real targets. Take the sky train down to the river and you’re bombarded with advertisements for Coke, Pepsi, and Pizza hut. At one stop there was a park where MTV was having a big concert with Thai artists and you would think that the biggest signs would be for MTV…you would be wrong. It may have been an MTV concert but there was no doubt that Coke and McDonalds were paying for it.

America has no real culture it can call it’s own….instead of culture you hear the word Americana a lot. It’s hard to have a singular culture when your citizens hail from every country in the world so the American culture is rooted in fast food, soda, rock & roll, and Alka Seltzer. The American culture isn’t a culture at all….it’s a product. And for some reason it sells well globally.

In Thailand the people are small and thin for the most part…yeah, every now and then you’ll hear a women sigh and say she’s gotten fat while trying on her size 0 jeans but that’s to be expected of women everywhere. Give it time though…back in the 50′s when McDonald’s was just starting out most Americans were thin of build. Look what the wonderful world of fast food has done for our country .

Although these establishments try and cater to the Thais by adopting their culture a little bit …a spicier chicken burger…a statue of Ronald McDonald giving a traditional wai. You know it’s all about the mighty dollar.

There’s still centuries of culture in Thailand from temples to food stalls but Americana is gaining footholds every where it can and little by little Americana is winning the culture war.

4 thoughts on “Picking Flowers in Petchaboon”