When visiting my girlfriends village back in January I noticed two long sheds out in back of the family house. Both sheds were made of bamboo and both were covered with blue and black tarps. When I asked my girlfriend she kept telling me that she would take me there later. This piqued my curiosity, so after a few beers and meeting the extended family I figured it was later enough and asked again.

I’m not sure if it’s all Thai girls or just my Thai girl but when asked a question she can never give me a straight answer.

So, when I asked again about the sheds and what they could be hiding she just said ” later teelac…I show you.” Another beer or two and later came so she took me out back to the sheds and said go in. She looked at me for a second thinking I would ask whats inside again so she could give me yet another non answer but I just gave up and went in. They were hiding mushrooms…thousands of mushrooms. Ok, they weren’t hiding them they were growing them.

They grow a little bit of everything on the land they have. A little rice, some flowers, a mango tree or two, and of course their secret stash of mushrooms. I thought they sold them at first but my girl was quick to let me know that it was the families personal stash.

Living in Mukdahan bordering Laos on the Mekong the Laos heritage is strong here and a lot of the dishes they make are Lao in origin and contain mushrooms. Two favorites are Gang Lo Mai and Gang Hitt, the former being somewhat of a mild soup with mushrooms and bamboo shoots and the later being a class A incendiary device containing mushrooms.

A plastic bag shaped like a bottle is filled with compost and fungus spores are added before inserting a plastic ring at the top giving it a bottled look. These are left outside for a bit and once ready are then stacked inside the sheds and kept in the dark. 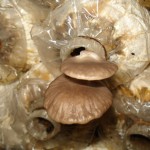 The mushrooms push out of the mouth of the bottle and are collected when grown. I’m not sure what the grow cycle is or how many mushrooms you get per bottle but there were a lot of mushrooms growing and they were readying even more bottles to go into the sheds.

From what I gathered they only grow two kinds of mushrooms in their sheds but their are many other varieties to choose from.